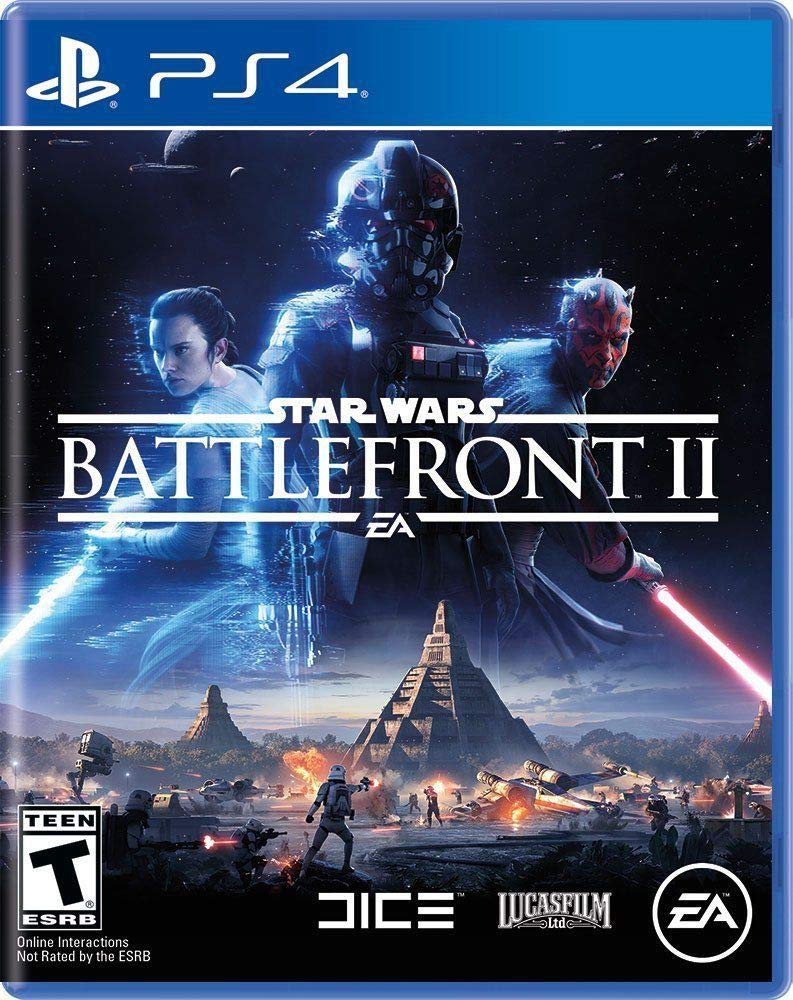 Embark on an endlessÂ Star Wars action experience from the bestsellingÂ Star WarsÂ HD videogame franchise of all time.

Rush through waves of enemies on Starkiller Base with the power of your lightsaber in your hands. Storm through the jungle canopy of a hidden Rebel base on Yavin 4 with your fellow troopers, dispensing firepower from AT STs. Line up your X wing squadron for an attack on a mammoth First Order Star Destroyer in space. Or rise as a newÂ Star Wars hero â Iden, an elite Imperial special forces soldier â and discover an emotional and gripping single player story spanning thirty years.

Experience rich and livingÂ Star WarsÂ multiplayer battlegrounds across all three eras: Prequel, classic, and new trilogy. Customize and upgrade your heroes, starfighters, or troopers, each with unique abilities to exploit in battle. Ride tauntauns or take control of tanks and speeders. Down Star Destroyers the size of cities, use the Force to prove your worth against iconic characters such as Kylo Ren, Darth Maul, or Han Solo, as you play a part in a gaming experience inspired by 40 years of timelessÂ Star WarsÂ films.

You can become the master of your ownÂ Star WarsÂ heroâs journey.

A New Hero, a Story Untold
Jump into the boots of an elite special forces soldier, equally lethal on the ground and space, in an emotionally gripping newÂ Star Wars campaign that spans over 30 years and bridges events between the filmsâÂ Star Wars: Return of the Jedi andÂ Star Wars:Â The Force Awakens.

The Ultimate Star Wars Battleground
AÂ Star WarsÂ multiplayer universe unmatched in variety and breadth where up to 40 players fight as iconic heroes, authentic to era troopers and in a massive array of vehicles on land and in the air â as battle rages through the galaxy.

Galactic Scale Space Combat
Space combat has been designed forÂ Star Warsâ ¢ Battlefrontâ ¢ II from the ground up with distinct handling, weapons and customization options. Join your squadron and weave in between asteroids fields, fly through Imperial Dock Yards and take down massive capital ships as you pilot legendary starfighters in high stakes dogfights with up to 24 players and 40 AI ships.

Better Together
Team up with a friend from the comfort of your couch with two player offline split screen play. Earn rewards, customize your troopers and heroes, and bring your upgrades with you on the online multiplayer battleground.

Master Your Hero
Not just an iconic hero your hero. Master your craft with customizable character progression. Upgrade abilities unique to each hero, trooper class, and starfighter. Use these abilities to adapt and modify your characterâs powers, either as lethal active effects on your opponents, helpful status boosts, or tactical assistance, to counter any opponent on the battlefront.

Fallout Wiki
Register
Don't have an account?
Sign In
Advertisement
English
View source
Welcome to Nukapedia the Fallout Wiki
The definitive Fallout source with 40,952 articles
We are creating the ultimate guide to the Fallout series, and invite all fans to help!
About · Welcome · Learn · Discord · Policies
Nukapedia the Fallout Wiki is a community of volunteer collaborators that work to provide accurate and comprehensive documentation of the Fallout series as well as its media and production. We rely on knowledgeable fans to help reach our goal of providing timely updates from sources our readers can trust. The wiki currently has 40,952 articles and 273 active editors.
Fallout is a franchise of post-apocalyptic role-playing games created by Interplay Entertainment, subsequently purchased by Bethesda Softworks in 2007. The first cohort of titles were released under the Interplay banner, including Fallout, Fallout 2, Fallout Tactics, and Fallout: Brotherhood of Steel.

If you see this, your JavaScript might be disabled or DiscordIntegrator plugin isn't working. If the latter, please contact a wiki administrator.