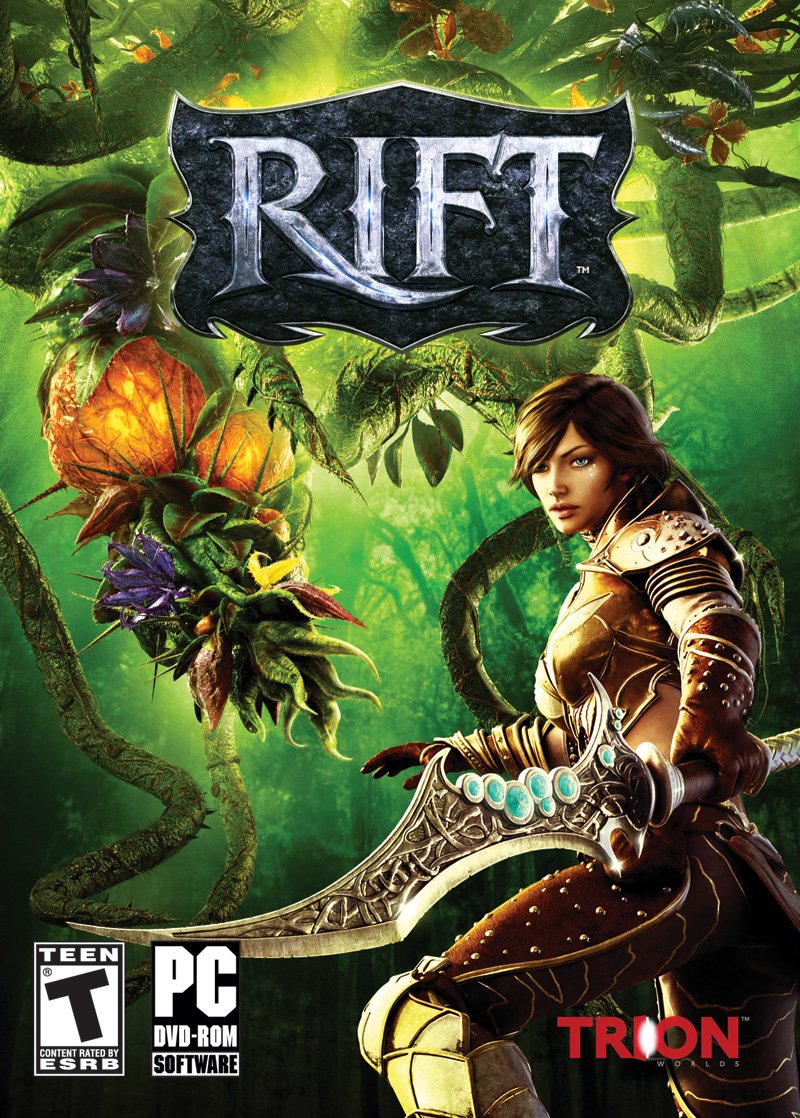 Rift is the complete and full-featured MMO experience youâve been waiting for! Adventure in the world of Telara as either a noble Guardian or techno-magical Defiant and enter a dynamic fantasy where 8 primal forces battle for control and the landscape is ever-changing. Build your own class using the Ascended Soul system and embark on challenging quests to take your RPG experience to new heights of achievement and excitement!

Rift is a Massively Multiplayer Online Role-Playing Game (MMORPG) for PC that challenges players to stop an ongoing invasion of their world by horrific creatures from other planes of existence, while simultaneously growing ever more powerful by doing so. These creatures appear at a variety of elemental rifts that erupt at the confluence of these planes. Using an extensive level of customization, which allows players to very nearly create their own character classes, players defeat enemies, seal rifts and draw power from them. Additional features include: standard quest gameplay as well as player vs. player action, two factions each containing multiple races and a dynamic world full of unpredictability.

Create your own character class to fit you fighting style.
View larger.

A wide range of creatures to conquer.
View larger.

Rift is set on Telara, a fantasy world which lies alarmingly close to a variety of other planes of existence In the final days of the Mathosian civil war, the Ward that protected Telara from planar convergence with these other worlds was severely weakened by a disaster known as the Shade. Since that time, rifts between Telara and other planes have been increasingly devastating the land, and old enemies in the form of monsters, held at bay by elemental prisons have begun actively clawing their way out. Telara's greatest enemy, the god Regulos, pounds against the outside of the Ward, seeking reentry into Telara to finish the job he once started. Meanwhile, Telara's own pantheon of gods has suddenly grown silent, and the world is descending into total chaos.

The people of Telara are now convinced that the end of the world is at hand. In these desperate final days, two major factions have arisen to battle the coming apocalypse: the Guardians and the Defiant. Though each faction wants to save the world, their beliefs and methods differ, and they war upon each other as often as they do other enemies of Telara.

Rift contains two main factions, the Guardians and the Defiant. Within either of these factions players can choose from four character callings, Warrior, Cleric, Rogue, Mage. Further, within these players gain access to a variety of different character possibilities known as "souls" - each soul granting players access to a unique "Soul Tree," which contains all of the traits and abilities that a soul had mastered during its life. As your character levels up, you earn soul points that can be used to improve that tree's soul level, granting players access to even more powerful traits and abilities. As a player's character grows in power, so does his or her ability to take on, or "attune" souls. A maximum-level player will be able to attune up to three souls of their choosing each with their own attributes. Souls grow in power as they become more specialized, and have well-rounded abilities that make them great for both solo and group play. The result is the ability to create your own class for virtually any situation.

Although it can be played on its own, Rift like all MMORPGs is designed to be played with others online. Players assume the role of an "Ascended Soul" - a Telaran slain during the great Shade War and resurrected to combat the forces of Regulos, the dragon god of extinction. Once a character's calling and initial soul(s) are selected players can take on quests alone or join together in loose confederations or more organized guilds to seek to defeat creatures that are spawned from rifts dynamically. Close the openings, and gain rewards to progress and level up. Rewards are given for all sorts of actions, including attacks, healing and more. Of course different guilds will also seek to undermine each other as well, leading to substantial player vs. player combat opportunities.

As we continue to monitor the COVID-19 situation, we are taking actions to help protect the health and well-being of our customers and partners. Please call your local store to book an appointment.
See adjusted store hours | Contact us
COVID-19: The health and well being of our customers is our priority and we are taking actions for your protection. Please call to book an appointment.
See adjusted store hours | Contact us
Turn inspiration into reality
Transform and elevate your living space with a wide selection of ceramic, porcelain, marble, granite, quartz and other natural stone products. No matter the project size or scope, for indoor or outdoor spaces, our consultants deliver exceptional personalized support. Ready to go beyond material? Make Ciot your design destination.
Discover our productsInduction Cooker, Household High Firepower Induction Cooker, Kno

CIOT IN THE MEDIA

WHY CIOT SURPASSES THE INDUSTRY STANDARD

Ciot is more than just a home improvement retailer. We are a turnkey inspiration and design destination. We guide and advise our customers from conception to completion. We open up a world of possibilities that goes beyond material. Discover the Ciot difference.
Extensive product range
Find the perfect finishing material for your project and budget thanks to the breadth and depth of our high-quality, exclusive and wide-ranging inventory.

This century's best finds, the latest trends, and authentic works of art await you.

Discover our vast selection of products

Customized services
Our team is brimming with talent, from our craftsmen's custom mosaics to our stonemasonry experts and professional installation services.

We leverage our know-how to make your design vision a reality.

Expert advice
Our experienced consultants will guide you through all phases of your residential or commercial projects, of any size or scope.

Our team has mastered the art of choosing the perfect materials for your unique project.

Your kitchen isn’t just where you cook, it’s where you live. That’s why InvisacookTM has created the most revolutionary technology ever to maximize living space by transforming kitchen countertops into a seamless induction surface.
Learn more

A space for inspiration

From ceramic tiles and natural stone slabs to unique mosaics, enjoy a vast inventory of finishing materials for floors, walls and countertops, plus must-have kitchen and bathroom plumbing accessories. Be inspired by our newest products, take advantage of our exclusive offerings, or craft a one of a kind custom creation. At Ciot, an exciting world of design awaits.

GMSWCG 24" Adult Three Wheel Tricycle 1/7 Speed Hybrid Cargo Cru
Tiles
Available in virtually any shape, size, colour or texture, in porcelain, glass, marble or granite, tiles offer durability and endless beauty. You will be astonished to discover Ciot’s vast inventory of diverse luxury tiles to cater to all tastes and needs.
Slabs
Larger format tiles are the latest trend in tile design. Offered in various materials, from natural stone to digitally printed porcelain, slabs transform any surface by visually expanding the space. Bigger tiles also mean low-maintenance surfaces due to fewer grout lines and larger surfaces. Who could say no to that!
Mosaics
Made of stone, porcelain, glass, metal or mixed materials, mosaic leads to surprising effects that enhance all interior living spaces, from floor coverings to your bathroom tiling needs. Ciot offers a selection of mosaics of infinite models, texture and colour combinations that will make your head spin.
Hardwood flooring
Very much like natural stone, every layer and coloration of wood is a testimony to the passage of time which makes every tree unique. Long driven to find the most exclusive stone products, we now pour the same passion into wood, researching its history and provenance. We seek the utmost quality, the richest colours and the most exquisite finishes the world’s best artisans can produce. Ciot brings to your home the best the forest has to offer.
Signature Collections
Our Signature Collections are as unique as our customers who favor them! With products carefully selected for their exclusive nature by our experienced buyers, they are unmistakably the « crème de la crème » of our discoveries. Their uniqueness will effortlessly add a signature touch to all of your projects.
Ciot Studio
Ciot Studio is a made-to-order mosaic workshop, unparalleled customer-oriented service, renowned experts but above all, it is infinite possibilities of patterns and materials for all residential or commercial projects. You dream of it? We will make it.
Plumbing accessories
Find an impressive selection of bathroom appliances, products and accessories to match the elegance of your slab bathroom floors or tiled kitchen countertops. At Ciot, we hold a wide inventory of high-quality design bathroom products from top suppliers such as Wetstyle, Kohler and Brizo.
Crane Co. Blind Embossed Beach Glass Notes (CF1160)
Ensure lasting beauty and performance for your tiles, slabs or mosaics and trust our team with installation needs and maintenance recommendations, including topnotch products to use. Taking good care of your countertops and floors will make mountains of differences and see them shine through time.
MMOBIEL Bike Chain Cleaning Tool Scrubber with Rotating Brushes
New arrivals
Our passionate and talented team of buyers are constantly on the lookout for new and exciting products and finishes to offer. Check out some of our newest arrivals and visit a Ciot store near you for more.
Featured products
The project of your dreams starts here. At Ciot, we are always on the lookout for trends and cutting-edge technologies. In this section, we regularly present our new products, innovations and exclusivities.
AVLA 6 Pack Porcelain Bowls, 11 Ounce Ceramic Rice Bowls, Round