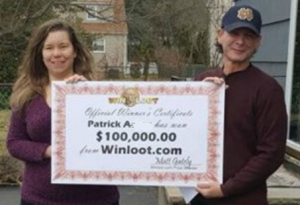 Said Matt Gately, CMO of Winloot.com, “after several attempts at contacting Mr. Acker through email failed, we tried everything we could think of including reaching out to local media.  Even other Winloot users offered their assistance in helping connect Mr. Acker with his newfound riches after we posted on our site and Facebook page that we were looking for a Patrick A. from New Jersey to award him $100,000.”

“…Dad, I saw your name on Winloot.com and I think you won more than me.”

So how did Winloot finally reach Mr. Acker?  It turns out that Patrick is not the only Acker who plays Winloot.com.

His daughter, who happens to live in Florida, also plays and had even won a $10 prize in one of the Winloot Instant Win Bonus games just a few weeks earlier.  She saw the post on the site and immediately called her dad to say “hey Dad, I saw your name on Winloot and I think you won more than me.”  Upon hearing the news Mr. Acker said “I still didn’t believe it was real but I figured maybe I’ll call just to see.”  That turned out to be a pretty valuable phone call.  As Patrick recounted the story about what his daughter had said, Mr. Gately replied “I’ll say, $100,000 is quite a bit more.” 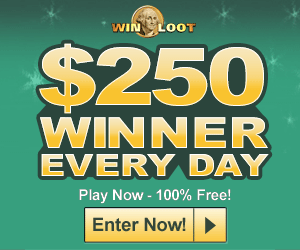 While Winloot normally mails the checks to its winners, over 18,000 and counting as of this writing, given the story of how long it took to find him and the relative proximity of Mr. Acker’s home in Woodland Park, NJ to their office in Long Island, NY, the Winloot team decided to deliver the check personally.  When they arrived Mr. Acker and his girlfriend were already at the door to greet them.  Mr. Gately handed Patrick an envelope and inside was a check for $100,000.  Mr. Acker peeked inside the envelope and exclaimed “I sure believe it now.”

When asked if he had any immediate plans for the money, Patrick and his girlfriend noted that they put a $100 down payment on a cruise to the Bahamas.  They now plan to invite a couple they’re friends with who are planning to renew their wedding vows to go along.   An incredibly nice gesture on their part.  With the rest, Patrick said he already had an appointment to speak with someone about putting some away for his retirement.  Then again, as he said to Mr. Gately when he was leaving, “I’ll see you soon when you come back with the $1,000,000.”

Fair enough Patrick.  There’s a new drawing every day at winloot.com and as you know better than anyone, you can’t win if you don’t play. 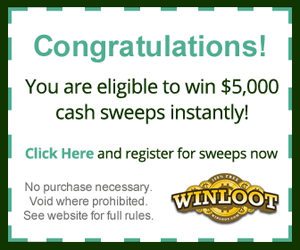